One of my fellow PhD friends here at Radboud University Nijmegen is Rev. Johnson Thomaskutty from Union Biblical Seminary (www.ubs.ac.in) in Pune, India. He is in the third year of his PhD program in which he is focussing on The Nature and Function of Dialogues in the Gospel according to St. John. He will be leaving us soon, to return to his teaching position at UBS.
He kindly offered to drink a nice cup of Dutch coffee with me, and share a few thoughts about how he, as an Indian Christian theologian, understands Jesus’ resurrection. I will put a few questions to Johnson, then type his responses out, and afterwards get him to make sure that I got it right. 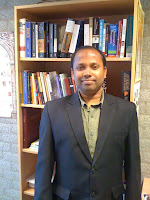 Question: Johnson, as a Christian theologian coming from India, and having two masters degrees in New Testament (one from Senate of Serampore University in India and the other from Princeton Theological Seminary in the USA), do you think it is important for the Christian faith that Jesus’ tomb was really empty following his resurrection, or not?
Answer: Yes, it is important. The reason? The resurrection appearances and the empty tomb are part of the foundational beliefs of the Christian faith. If any one of these two is nullified, then the basic tenets of Christianity are in question.
Question: But Johnson, some theologians would argue that Jesus’ resurrection was spiritual, therefore/as a result the empty tomb is not important. What does spiritual resurrection mean to you?
Answer: Jesus’ body could become spiritual even before his resurrection. In John 6 we find that Jesus walked on water, similar to John 20 where he came to the upper room where the door was closed. In both instances Jesus had the ability to appear and disappear, something which is beyond human comprehension. Thus, Jesus’ resurrection was spiritual in the sense that he could appear and disappear, but it was also material because the tomb was “really empty”. He rose with the same body, but it was transformed.
Question: If this is the case Johnson, what is the significance of the resurrection for your ministry in India where you teach? 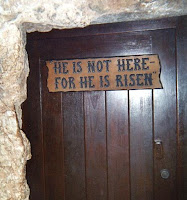 Answer: The significance of the resurrection of Jesus in my Indian context is multi-faceted. When I’m talking about the resurrection of Jesus in our multi-religious, multi-cultural and pluralistic culture of India, I have to re-interpret the significance of Christ’s resurrection for our diverse communities. The salvific significance of Christ’s work on the cross, and his resurrection should first and foremost be taught and proclaimed, as the good news of salvation for the various religious and ethnic communities. As a second order to this, when I am witnessing Christ for instance to the Dalits, Tribals and the Adivasis (the poor and marginalized, also called the dust of the dust), I use Christ’s resurrection as a model for liberation out of the clutches of oppression and dehumanization. As Christ was humiliated on the cross, and was raised by the Father from the grave, so also, Christian mission should focus on the upliftment of the oppressed out of the bondages of poverty, casteism, sin and injustice.
Resurrection is therefore a unique missional paradigm, comprising the historical reality of Christ’s resurrection, its salvific significance as well as its social implications.
Posted by Frederik Mulder at 06:13

Fantastic interview! Thanx for sharing with us.

Jurgen Moltmann "Faith in the risen Lord is not just a confessional statement; it is also a commitment to be agents of the power of resurrection. Faith means not only believing in the truth of Christ's resurrection and looking forward to a life after death; it means first of all rising up ourselves and sharing in the creative power of God which makes possible the impossible and summons into being things which are not yet in existence"

The experience of resurrection empowers us to go forward in our life journey with the hope that our lives and our destiny are secure in God. In his book, Cross: Hope of Suffering Humanity, Rev. Dr. P. G. George, quotes D. T. Niles who said: "The resurrection that awaits us beyond physical death will be but the glorious consummation of the risen life which already we have in Christ." Resurrection is the victory over death and over all the forces of darkness. Rev. George adds: "The eternal life gives us hope for the future and strength to face tomorrows. Jesus is now our eternal contemporary."

Resurrection is God's protest against death and, at the same time, the celebration of life and hope. We need to hold these two in dialectical tension in order to understand the resurrection of the crucified Christ. In India we can say that resurrection is the protest against the forces that deny life and justice to the poor and the marginalized, and also that resurrection is the hope that ultimately, God's justice will triumph. This is not just a utopian hope unrelated to reality, but the affirmation of our commitment to work for the establishment of God's reign on earth. Struggle is the protest of those who hope, and hope is the celebration of those who struggle.

Welcome Abraham!
I've read most of the guys' work you quote. Do you think the empty tomb of Jesus is required for the theological interpretations you made above or not? To put it more sharply, can all of what you said above still be said if one believes Jesus' bones might be hidden in some tomb in Jerusalem?

Just last night I had 4 hours of intense talk with one of the young boy whom I know. He found no meaning of life when he was a Buddhist. He found meaning in Jesus & His resurrection.
My life and the life of the world has convinced me that Jesus' ethical teachings like the Sermon on the Mount was not enough. The problems confronting the human race and the pain in individuals' lives, my own and others, is such that nothing but a crucified and risen Saviour will do. The people who stand at the heart of the intractable wars in the world are not short of knowledge of the Sermon on the Mount, or its equivalent in another religion. But this head knowledge of fine sentiments does not lessen their hate or bring them closer to reconciliation. I think of those whom I know personally, who suffer as I write, and I know they need something more than fine words about how to live.
They need someone who can penetrate the very core of their aloneness. They need someone who can meet them in their suffering. They need someone who can walk with them through the valley of death. Some need someone who can guide them out of the hopeless and poisonous maze of hate and self-hate.
Call it "emotional, magical", etc. if you will, but of one thing I am sure; nothing less than a personal confrontation with the radical and explosive force of the death and resurrection of Jesus can possibly meet their needs. More than lofty ideas, this leads to a living relationship - a relationship with a loving God who has faced and overcome all they face, and more. I have found it to be so in my own life.
G. E. Ladd "The entire New Testament was written from the perspective of the resurrection. Indeed, the resurrection may be called the major premise of the early Christian faith." John S. Whale put it in Christian Doctrine:
"Belief in the resurrection is not an appendage to the Christian faith: it is the Christian faith. The Gospels cannot explain the resurrection; it is the resurrection which alone explains the Gospels."

Abraham, I thank the Lord Jesus Christ for your astonishing testimony. If you don’t mind, I’d like to share it with some of my friends...

If it helps someone go ahead...Thanks

I am Frederik Mulder. I have a PhD in New Testament and Reception History from Radboud University, Nijmegen, The Netherlands (April 2015). I also hold an MA in Biblical Studies from Durham University with a mini dissertation on the reception of the resurrection in Irenaeus, Tertullian, and Marcion. My supervisor was Francis Watson.
Before moving to the UK in 2007, I acquired an MTh in New Testament from Pretoria University, South Africa, in 2006, where I also completed my BTh in 2004.